Lt. Gov. Brent Sanford today presented HB1018, a $33 million investment in UAS technology and infrastructure in the state, at the Northern Plains UAS Test Site. This includes $28 million in funding for a statewide network that will support UAS (drone) flights beyond visual line of sight (BVLOS). An additional $2 million of this funding will provide continued support of test site operations. The remaining $3 million will be used to upgrade infrastructure at Grand Sky UAS Flight Center.

The statewide BVLOS network will build on previous UAS advancements in the state and will support the safe integration of unmanned aircraft into the National Airspace System. This will include providing for command and control of UAS. Subject matter experts within the state, including the Northern Plains UAS Test Site, will work with federal agencies to ensure regulatory compliance.

“As long as North Dakota is going to lead this [UAS] industry, we might as well do it in big ways,” said Nicholas Flom, Executive Director of the Northern Plains UAS Test Site. “Through the vision and leadership of Governor Burgum and the recognition and support of our state legislators, we are poised to do just that.”

Funding for the statewide BVLOS network was officially announced last week by Flom, at AUVSI Xponential, a UAS conference and trade show with an estimated 8,500 industry leaders in attendance. The statewide network will facilitate economic growth opportunities across the state in diverse industries, including agriculture, utilities, and public safety, by enabling UAS efficiencies for state and local agencies and commercial interests, both existing and future.

“Major investments like this scream to the rest of the nation and the entire world that cutting-edge UAS research, testing, and commercialization is cleared for takeoff in North Dakota,” Sanford said. “As the saying goes, ‘If you build it, they will come,’ and we can’t wait to see what kinds of exciting uses of UAS arise from this ambitious project.”

This revolutionary infrastructure will be designed to be scalable, marking the statewide BVLOS network as a significant step forward in the expansion of UAS capabilities. The Northern Plains UAS Test Site will establish and administer the BVLOS program for the design, purchase, implementation, and operating costs of the BVLOS system. 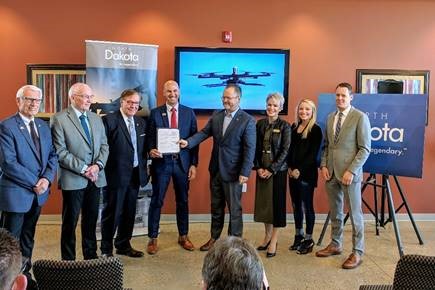