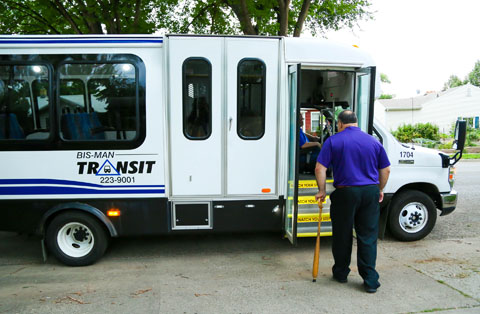 Bismarck - Demand-response transportation, dial-a-ride, paratransit, door-to-door transit—the service has many names. It has a history too. Bis-Man Transit started in 1990, and demand-response paratransit service for persons with disabilities and the elderly has been available in Bismarck-Mandan since 1991.

“The service began because people needed it, and the need is still there today—probably more than ever,” said Tom Schiwal, regional administrator for the Vocational Rehabilitation Division at the state’s Department of Human Services. Persons with disabilities rely heavily on the paratransit service to get to their jobs, Schiwal says.

Ask Shawn Hammes, who has been using Bis-Man Transit’s paratransit call-ahead dispatch for a ride every workday for 18 years.

“Bis-Man Transit has always been there for me. They’ve enabled me to keep a job at a great company,” says Hammes.

Since the service recently discontinued between midnight and 5:30 a.m., Shawn is one of the first pick-ups at 5:45 each weekday morning. His shift at the reception desk at Basin Electric Power Cooperative starts at 7 a.m., but he asks for the earlier time to make sure he’s in place to pick up the phone or greet a customer when the co-op opens.

Over the years he’s gotten to know a few of the van drivers.

Gary Schumacher, operations manager for Bis-Man Transit, reports that they pick up and drop off an average of 550 to 600 persons a day, and about 700 per day in the winter. About 25 percent of these riders are in wheelchairs.

Bis-Man Transit asked all paratransit riders to reapply for ADA-eligibility by July 1, 2017. Prior to that, approximately 10,000 persons in the Bismarck-Mandan area were eligible to use the demand-response service if they called weekday dispatch at least 24 hours in advance. Budget shortfalls prompted a realignment of the service, which is funded by local, state and federal dollars. Hearings on the changes were held in 2016.

“It’s critical that affordable door-to-door transportation be a sustainable service,” said Julie Horntvedt, executive director of the State Council on Developmental Disabilities who also serves on North Dakota’s governor-appointed Olmstead Commission. “For many people, access to transportation is what opens the doors of the community to them. Without paratransit, they would be isolated.”

In North Dakota, 44.5 percent of persons with disabilities are employed (compared to 35 percent nationally).1 Those who want a job to fit their abilities are largely successful, and employers in Bismarck-Mandan tend to be supportive of employees with special needs.

“Persons with developmental disabilities or other disabilities gain confidence when barriers are removed,” said Schiwal. “Transportation they can trust is key to helping them keep a job and contribute to their community.”